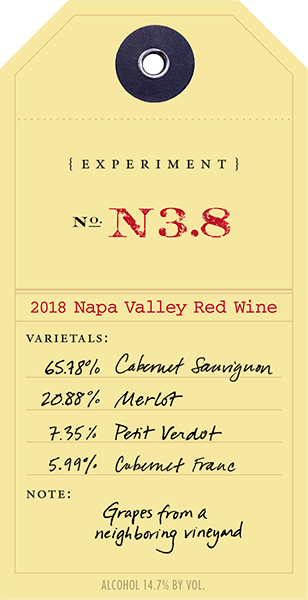 This is the third wine in our “N” or Neighbor series. With this wine, we were interested in exploring the effect of canopy structure. The vineyard of choice employs a canopy structure known as a Modified California Sprawl. Shoots grow up from the cordon, arc out toward the center of the row and then drape downward or sprawl. Our expectation was that the sprawling canopy will allow good midday light interception by the fruit and good afternoon protection from the heat and sun.

A neighboring vineyard that was farmed in a similar manner to our estate on Pritchard Hill was first selected. It had both the Modified California Sprawl trellising as well as a tighter Vertical Shoot Position trellis with the same row orientation. This allowed us to see how both performed. Observations were made during the growing season, and wine was made from the vineyard, aged for 20 months and then bottled.

This experiment confirmed our expectations that the Modified California Sprawl (MCS) would provide better protection to the fruit than the Vertical Shoot Position (VSP). We observed that the fruit in the MCS was better shaded and had less dehydration late in the growing season. Additionally, the midday light interception was better in the MCS than the VSP as the shoots were not positioned directly above the fruit. This older style of trellising seems well adapted to warmer parts of our vineyard, which is why at least one of our new blocks will be planted with this trellising system. The exploration of trellis structure also got us very interested in the effect of row orientation, something explored in Experiment R9.8 also from 2018.