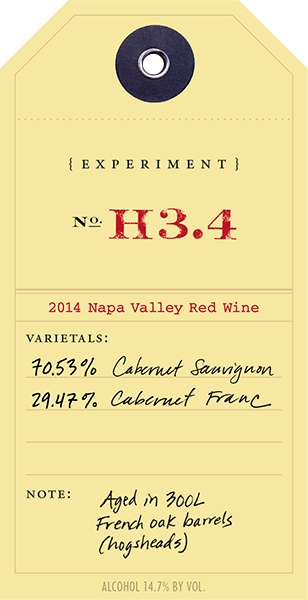 Much of what we have and do in Napa is an homage to Bordeaux. The standard barrel is a great example – they make them there, so that is what we use. However, this imitation doesn’t always work. We became interested in exploring barrel size when looking at how we age our wine. Our hypothesis was that aging our wine in a 300-liter (rather than a standard 225-liter) barrel would provide the right balance between maintaining freshness and allowing the tannin progression we desired.

Following fermentation, a number of lots were split and barreled down in both standard sized barrels and a 300-liter hogshead. These wines were tasted throughout the next year and notes were taken. Following that initial aging, a blend from the wines aged in hogsheads was assembled and returned to the larger format barrels for another 8 months before bottling.

This experiment worked to maintain the freshness of the wine; however, the progression of the structure was slower than we expected, delaying bottling by a few months. Most illuminatingly, it demonstrated the dynamic and important relationship between wine volume and oxygen – or rather the redox chemistry of the wine. Essentially, the larger the volume of wine relative to the oxygen, the more reductive the wine will be. This is accentuated by where the wine is in its life. For example, when it is newly formed it, has a much higher capacity for oxygen. So, a new wine in a larger vessel has a high-reductive capacity and will be slow to evolve. Seeing this play out in the aging of this Experiment was fascinating and informative in how we think about oxygen’s role and interaction with wine from fermentation to post-bottling.