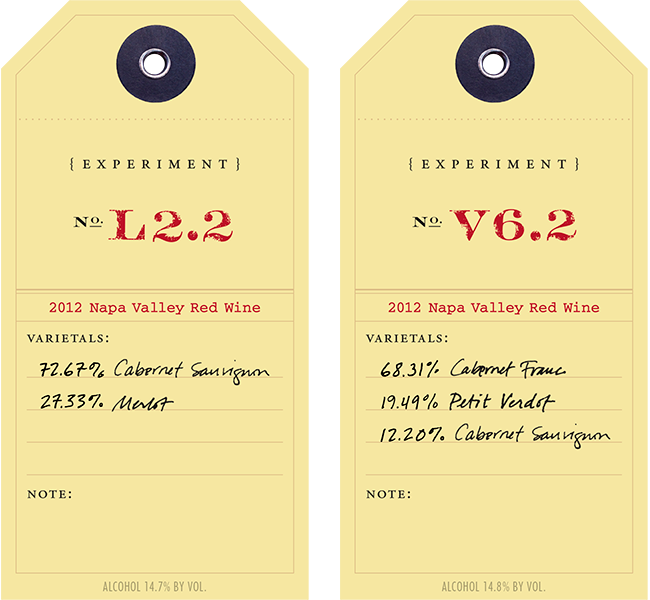 Proportions are very important in blends. What works for each variety varies wildly as well. Over the years, we have come to understand that, surprisingly, Cabernet Franc works well as a major component in a blend. The same, less surprisingly, is well known for Cabernet Sauvignon. With the 2012 L2.2 and V6.2, our aim is to explore larger proportions of both Merlot and Petit Verdot in blends.

Harvest in 2012 started on September 21 with Merlot and concluded on October 18 with Petit Verdot. Each lot was fermented and aged individually for the first year. After 14 months, we tasted and assembled these two blends, focusing on these two varietals. These blends were then aged an additional 4 months in barrel prior to bottling.

Our initial impressions found that both these blends were delicious in their own unique ways. Merlot appears to be a bit more pliable as a blending variety. It adds flesh and roundness to the wine and partners well with Cabernet Sauvignon, supporting where it is needed and not overpowering the wine.

The Petit Verdot – known for its deep notes and potent color – adds some serious density and heft to the 2012 V6.2. It’s a bold and beautiful contrast to the Cabernet Sauvignon and Cabernet Franc in this blend. We find that it is fairly immediately charming, if a touch overbearing. How this will play out over the longer term is a conclusion we haven’t reached yet and one that is exciting to revisit.