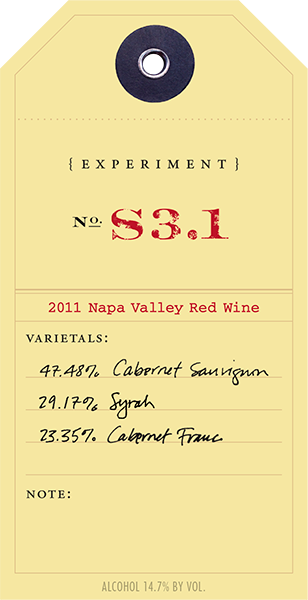 The 2011 spring was both cold and wet. As a result, many varieties suffered a lot of shatter and yields were down significantly – none more so than Syrah. We harvested and fermented the variety separately, but it was a tiny amount. Without enough to release on its own, we had a chance to try something for the first time – blend Syrah with Bordeaux varieties. Our expectation was that Syrah would seamlessly add weight and texture.

On October 19, we harvested our estate Syrah. This small amount was crushed into a few Burgundy barrels for fermentation. After 33 days on skins, the wine was drained off and returned to barrel for aging. Then, following 14 months of aging, we blended this wine with Cabernet Sauvignon and Cabernet Franc before returning it to barrel for another 5 months prior to bottling.

This Experiment provided an interesting look into the interplay between Syrah and Cabernet Sauvignon. Syrah has a wildness that is incredibly charming – clear when blended with the more refined and suave Cabernet Sauvignon. Together they make a seamless and exhilarating wine that demonstrates how compelling Syrah can be in a blend as well as on its own.