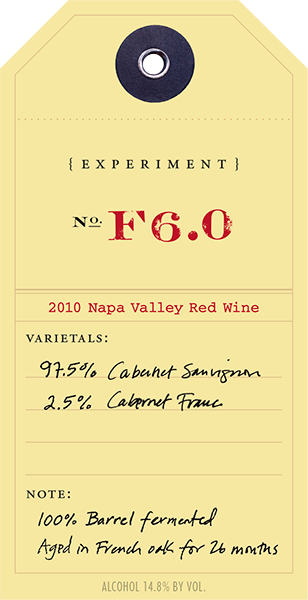 For this Experiment, we focused on fermenting in barrel. This technique allows us to pick pieces of the vineyard that are too small for any of our tanks and ferment them separately. Additionally, it aids in integrating oak into the wine very early on and typically adds a little richness to the wines. A portion of wine fermented this way was held aside to explore how this wine evolves and to observe the long-term effect of barrel fermentation.

At harvest, several small portions of our vineyard were harvested separately. A mix of new and once-used barrels were chosen for each of the small portions. One of the heads of the barrels was removed from one end, then the barrels were set upright and filled with fruit. Following fermentation, the wine and grape skins were removed, the barrel heads were put back in place and the barrels were filled with wine. After a year of aging, several barrel-fermented lots were blended and aged for an additional 8 months before bottling.

Conclusion: Upon initial evaluation, these wines we were collectively impressed by the early oak integration and richness that barrel fermentation gives. Over time, though, this impression was not so overt – such that by the time we bottled, it was of negligible effect. Our other exploration was in the way we picked and blended parts of the vineyard. This vintage we picked lots based on soil chemistry lines rather than block lines. The differences in the resulting wines were strong enough that we were compelled to harvest each of these tiny parts separately, resulting in as many as 56 lots from a 15-acre vineyard. Ultimately, understanding each of these parts would lead to the 2017 F2.7 Experiment.