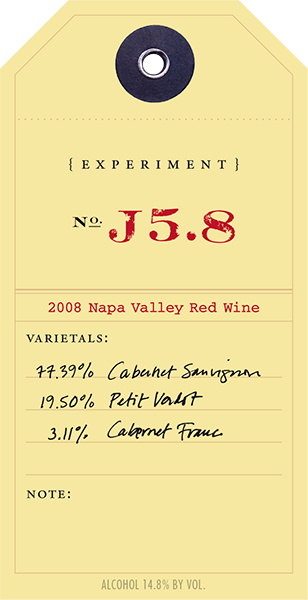 In 2008, we were releasing our inaugural vintage of Experiment – the 2005 K1.5. We were thrilled with that wine and were curious to explore if a similar blend would work – this time with Cabernet Sauvignon in place of Cabernet Franc. Our hope was that it would tell us something more about the first Experiment and about the Cabernet Franc we blended with it.

After 14 months of aging as individual lots, one lot (four barrels) of Cabernet Sauvignon was selected. We particularly enjoyed this lot and added a single barrel of Petit Verdot. We then aged this blend for an additional 6 months and bottled it.

This wine proved to be dense, rich and compelling. Just as the first Experiment opened our eyes to how good Cabernet Franc can be, this wine confirmed for us that Cabernet is king. Additionally, this wine demonstrated some evolution of Petit Verdot as the vineyard became established. We love the great density it provides to the wine; however, using it in large proportions can be a touch dominating. It has been fascinating to watch this wine find its balance over time.