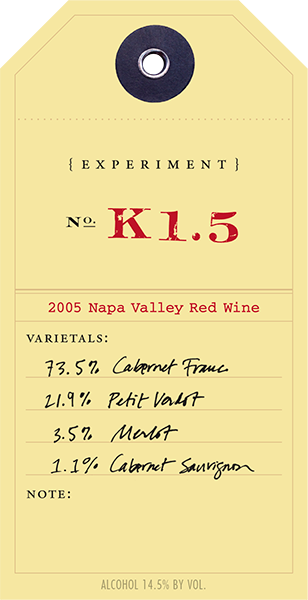 We think of the 2005 K1.5 as our first true experiment. Though we created our very first wine from the estate in 2004, that wine would not be deemed an Experiment wine until its release in 2011. The 2005 K1.5 was our first vintage grown and made on the estate. We took a calculated chance and created a blend of varieties that most impressed us from our newly established, young vines. Our aim was to test the convention of making Cabernet Sauvignon-dominant blends in Napa. We predicted that Cabernet Franc and Petit Verdot more completely captured the estate.

In the early days of the vineyard, Cabernet Franc and Petit Verdot were the stars of the show. Cabernet Sauvignon was good but just finding its feet. We decided to try something new and utterly unconventional – blending the lots that most surprised us. In the end, we had a blend that was delicious, compelling and certainly not what any of us had first expected.

This wine started the Experiment series for us in earnest. It encouraged us to explore every curiosity and to listen carefully to what the estate has to say.. This particular venture gave us the confidence to use more Cabernet Franc in our blends – the 2006 OVID is 41% Franc and most years are between 20 and 30%. Additionally, this wine is the genesis of what would become our co-flagship, Hexameter, celebrating the unique and irresistible Cabernet Franc from our estate.